JONESBORO, Ark. — One of seven outstanding students graduating from Arkansas State University in May 2014 will be the newest Wilson Award recipient. The winner will come from the Distinguished Service Award (DSA) winners and will be announced Wednesday, April 2, at Cooper Alumni Center Student Honors Awards ceremony.

The Distinguished Service Award winners are recognized as the institution’s most outstanding graduates because of their leadership, scholarship, and citizenship. Faculty, staff, advisers to student organizations, and other members of the campus community submit nominations for these prestigious awards.

All of the nominees have provided countless hours of service to the community, their classmates, their departments and colleges, and to Arkansas State University. A committee comprised of students, faculty, staff, and past Wilson Award recipients makes the final selections.

The DSA recognition comes at the start of A-State’s Convocation of Scholars, an annual celebration of academic achievement that includes college and departmental awards and recognition events.

Recipients of Distinguished Service Awards (in alphabetical order) and their achievements are:

His academic achievements include membership on the Chancellor’s List, named to Who’s Who in 2013, membership in Lambda Pi Eta Honor Society (a mentoring program), and induction into Pi Sigma Alpha and Pi Theta Kappa Honor Society.

In 2011, he received an American Future Farmers of America (FFA) degree, the most prestigious degree that the National FFA Organization can bestow upon a member. The degree honors the FFA member who has demonstrated the highest level of commitment to FFA and makes significant accomplishments in supervised agricultural experiences.

A member of Arkansas State’s successful debate team, Christenson serves as that squad’s captain and will represent Arkansas State in the international tournament in Paris. He served as the opinions editor for the school newspaper, The Herald.

Annie Everett of Wynne is a social work major and is set to receive her bachelor’s degree in May 2014. Her academic achievements include membership in Phi Alpha Honor Society for social work majors, the Golden Key International Honor Society, Chancellor’s and Dean’s Lists, Who’s Who Among Students in American Universities and Colleges, and the Strong-Turner 3.0 Society.

In the fall of 2013, she was nominated by non-traditional students on the Arkansas State campus for the award as a recipient of the Leadership of Excellence Award. Everett is also a two-term member of the Student Advisory Council, a Global Student Leader, and the Student Conduct Board of which she served as president, vice president, and secretary during her time as a student.

As a member of Zeta Phi Beta sorority, Everett is involved in numerous volunteer activities as well being part of Volunteer Arkansas State Issues and Awareness in which she planned events surrounding awareness to relating college students and community organizations.

Some of these activities include a blanket drive for the homeless, working at the Salvation Army to help donate personal hygiene bags for the homeless population, coordinating a campus food drive and collecting over 2,000 food items. She worked with the University Police Department about seat belt awareness and promoting the breast cancer program.

She is the daughter of Earlean Robinson of Wynne.

Shelby Fiegel of Lewisville, Ark., will receive her bachelor of science degree in journalism, with an emphasis in public relations, in May. She also has a double minor in English and marketing.

In addition to working in the Chancellor’s Office, she also worked as a public relations intern in Fowler Center. Fiegel is a member of the Honor College Association (HCA) and was elected as that’s group’s secretary and vice president.

Fiegel is involved with numerous organizations and is an A-State study abroad student who traveled to Europe in the summer of 2012 with members of the Department of World Languages and Cultures. The group traveled to Berlin, Paris, and Madrid. She did volunteer work with the Northeast Arkansas Humane Society and as a Red Wolf Ambassador.

Fiegel is the daughter of Joe and Cyndy Fiegel of Lewisville.

Danielle Goodwin of Batesville is majoring in nursing and will graduate in May 2014 with a bachelor of science degree in nursing. Goodwin, who attended Arkansas State on a Vice Chancellor’s Scholarship and Arkansas Academic Challenge Scholarship, is a four-time member of the Chancellor’s List and five-time member of the Dean’s List. As a cheerleader, she also is listed on the Athletic Director’s Honor Roll since fall 2010.

Goodwin has been an Honors College student since fall 2010 and is a member of Arkansas State’s Who’s Who roll. She is heavily involved in the Student Government Association by serving as a Nursing and Health Professions senator and freshman senator. The honoree has served in different capacities in her sorority, Alpha Gamma Delta, and held office in the National Panhellenic Council.

She has worked as a WOLF ambassador for the Office of Recruitment and as a Diamond Doll for the Red Wolf baseball program. Goodwin has recorded extensive volunteer service with the Jonesboro Heart and Soul 5K, Special Olympics, Juvenile Diabetes Research Foundation, and Up ‘til Dawn to raise money to benefit St. Jude’s Children’s Hospital.

She is the daughter of Rob Goodwin of Jackson, Mo., and Suzie Beshears of Batesville.

LaTasha Moore of Falcon, Ark., who will graduate in May with a double major in communication studies and Spanish, was selected for her record of citizenship, scholarship and service during her career at Arkansas State.

She is a member of the Chancellor’s and Dean’s Lists as well as being a Strong-Turner 3.0 Society honoree. Moore was inducted into the Alpha Lambda Delta Honor Society, the Golden Key International Honor Society, National Society of Collegiate Scholars and Lambda Pi Eta National Communications Honor Society. Moore is also winner of the spring 2013 Communication Studies Award.

Moore has membership in numerous organizations starting with the Residence Hall Association, the Association of Women in Communications, First Year Studies as a mentor, and the Black Students Association, serving as a WOLF ambassador, and working in the Student Government Association.

With numerous volunteer activities to her credit, Moore gave of her time to the Martin Luther King Jr. Day of Service, helped build a home for Habitat for Humanity, and worked on events for Ridgecrest Nursing Home and City Youth Ministries. She worked with the Salvation Army, the Craighead County Miracle Rodeo and with the NEA Humane Society.

She is the daughter of Arlee Moore and Mattie Pickens.

Stephanie (Stevie) Overby is an animal science major who will earn a bachelor of science in animal science/pre-vet diploma in May 2014. The Little Rock native has a minor in Spanish.

Overby, the 2013 Homecoming Queen at Arkansas State, is also a member of the Chancellor’s and Dean’s Lists. She was awarded the Lou Nedrow Award as the outstanding member of Alpha Gamma Delta sorority for willingness to serve, her leadership, and academic excellence.

Throughout her tenure as a student, Overby participated in Up ‘til Dawn, the Action Fund Commissioners Committee, the Student Government Association, Volunteer A-State, and Orientation Leader designed to be a liaison between incoming students, faculty, and staff to ensure they are confident about coming to Arkansas State.

In addition, she served as a student ambassador for the College of Agriculture and Technology, the Student Activities Board, the Pre-Vet/Block and Bridle Club and the Equine Club.

She is the daughter of Spencer Overby and Kathi Overby of Little Rock.

Randi Wright of Cave City, also a nursing major, will graduate in May with a bachelor of science in nursing degree. Wright is a Who’s Who award recipient and Honors College Ambassador. She was selected from 80 nursing students to mentor sophomore nursing students and encourage success. A member of the Chancellor’s List for six semesters, Wright also attends Arkansas State on a University Honors scholarship.

As a member of the National Student Nursing Association (NSNA), Wright is a voting delegate for NSNA legislation and an active participant in the Tot For Trots fundraising in 2012 and 2013, benefitting St. Bernards Regional Medical Center.

She is also a member of Delta Epsilon Academic Honors Society and is involved with numerous volunteer projects and organizations including fundraising and coordinating events with United Way, The Learning Center, Angel Tree, March of Dimes, Unicef, Northeast Arkansas Food Bank, and the Women’s Crisis Center of Northeast Arkansas.

She is married to Alan Wright. 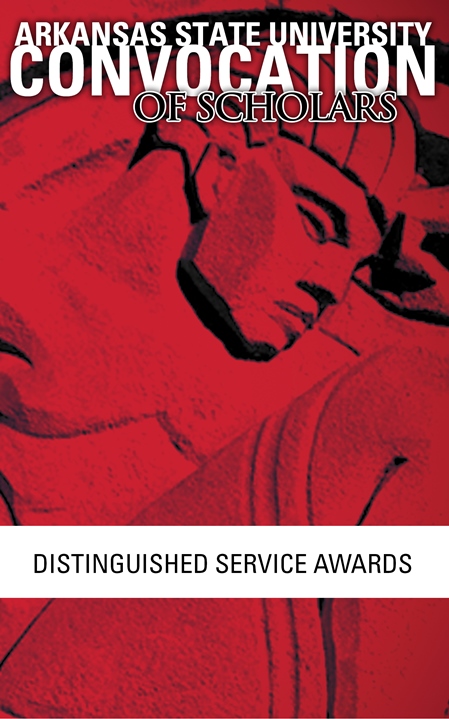