It’s a sunny afternoon with nary a cloud in the sky as she maneuvers into the starting block. A second later, the starter’s gun sounds and she sprints out in her assigned lane.

Hurdles arrayed in her path. One after another, she glides across them effortlessly.

A wide, beaming smile stretches across her face as Sharika Nelvis comes to a stop to catch her breath at the end of the race.

Unseen are the real hurdles the 24-year-old Arkansas State senior has navigated to become a Division I student-athlete, and then an all-American; the obstacles of personal experiences of heartbreak and tribulation that make her achievements even greater.

In life, there are those who are in constant struggle coping with adversity. Conversely, a select few are able to turn adversity into a blessing. By age seven, Sharika lost both of her parents. With no place to go, she and her four siblings moved in with their grandmother.

Life presented another challenge as her grandmother suffered a debilitating stroke a few years later. Once living with her grandmother was no longer an option, she and her older sister spent the remainder of her adolescent life on the northeast side of Memphis, Tenn., residing at their aunt’s.

With a childhood filled with uncertainty and the hope of normalcy all-but-gone as an adolescent, she discovered an unwavering will to persevere.

Nelvis concludes one of the most decorated careers in A-State Athletics history this spring and graduates in August with a photo journalism degree.

A three-time (2012-14) all-America indoor track honoree by the U.S. Track and Field/Cross Country Coaches Association (USTFCCCA) and twice (2012-13) all-American outdoors, she became a national champion at the 2014 NCAAs in Albuquerque, N.M., this March.

Of course, it was the indoor 60-meter hurdles.

Nelvis has also been recognized as the 2013-14 recipient of A-State’s prestigious Terry Gwin Award for outstanding leadership, citizenship, scholarship and athletic performance, and was recently selected as the Sun Belt Conference’s Female Student-Athlete of the Year for the 2013-14 season.

As a sixth-grader, Nelvis realized she had the gift of speed. “I always figured I was pretty fast in elementary,” said Nelvis. “I wanted to start running when I attended middle school and I became pretty good at it.”

With God-given athletic ability and a competitive fire, Nelvis rapidly developed into a productive performer in other sports, too––like volleyball and softball. Despite not being her best sport, basketball would help springboard Nelvis’ track career as she played hoops in preparation for the spring track season.

She competed three seasons (2007-09) on the hardwood and was lauded by her head coach (Kaclin Macklin), who also served as the school’s track coach, for her defense and rebounding. Playing sports also created obstacles for Nelvis to overcome; she fractured her ankle in eighth-grade basketball and did likewise to the same ankle again in high school. Moreover, she would roll her ankle in track warm-ups as a junior and grit out the mishap to not only race in the sprint event, but to place first.

Track still was first and foremost sport for the multi-talented Nelvis. She earned all-state recognition in five events as a senior at Memphis’ Northside High School and capped off her stellar career by being selected as Tennessee’s “Gatorade Runner of the Year” for 2009. The success achieved by Nelvis parlayed into a full scholarship offer at Southwest Mississippi Community College, but after just a few days there Nelvis was unhappy and returned home.

She was then recruited by former A-State assistant/fellow Memphis native Jason Brooks, with whom she became acquainted from her Blue City Memphis AAU track days. At Brooks’ suggestion, Nelvis enrolled at A-State in fall 2009 and bided her time until the next season to make her debut.

Arkansas State had a profound impact on her life and Nelvis is quick to point out she wouldn’t trade her experiences as a Red Wolf.

“I really honestly love my university,” said Nelvis, who hopes to continue her athletic career at the professional level. “It’s been an honor to be on the (A-State) track team and surround myself with great people. I have made friends who will be friends for the rest of my life. I’ve met a lot of people and traveled to a lot of places, so it’s been a great opportunity to be a student-athlete at A-State. “My time (at A-State) really went by fast and I don’t know how different I would’ve been had I gone somewhere else.”

Perhaps the one who’s most happy Nelvis decided Arkansas State was the place to be is her head coach Jim Patchell.

“Not only is Sharika a great athlete, but she is a great person and has overcome a lot of obstacles in her life,” said Patchell. “Talent alone is not good enough to get you to a national championship. She is very dedicated and works extremely hard, which is why she has achieved so much. She has helped to raise our program back to national recognition and even though this is her senior year, she has a great career ahead of her on the world stage.”

Nelvis, who no doubt will go down in A-State track and field history as one of its all-time best, has come to understand the positive effect adversity can have upon an individual.

“All of my struggles have made me who I am today. Being in the situation I’m in, I’m really proud of myself and I wouldn’t be as strong as I am today without (those struggles). A lot of good things are going my way,” she said, smiling. 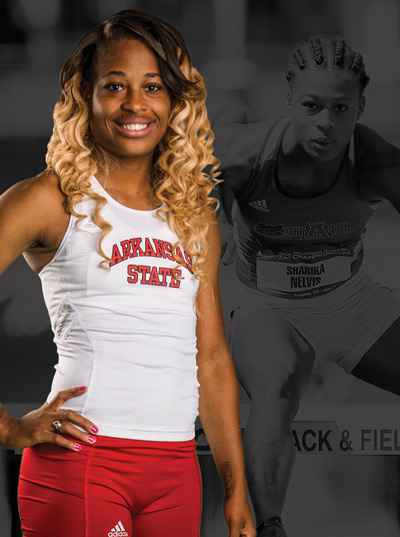 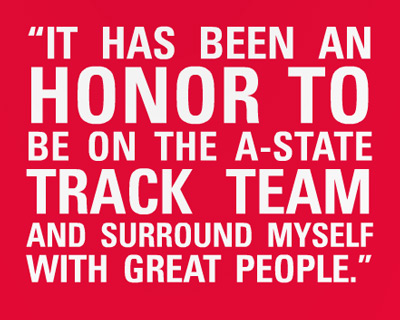 Alumni Association membership is open to all former students, friends, and persons interested in ASU.