JONESBORO -- On Friday, April 26, the Concert Choir will join the Wind Ensemble for the finale concert at Arkansas State University celebrating the music of internationally renowned composer Dr. David Maslanka. The concert will be start at 7:30 p.m. in Riceland Hall at Fowler Center; admission is free.

Dr. Timothy Oliver, director of bands and coordinator of wind and percussion studies, along with Cheri Avery, graduate associate conductor, will lead the ensembles as they perform works written by Dr. Maslanka, who will be concluding his week at ASU as composer-in-residence. The Concert Choir is directed by Dr. Dale Miller, director of choral activities.

Under the auspices of A-State’s 2012-13 Lecture-Concert Series, this concert will be the fifth of the week at ASU featuring Dr. Maslanka’s compositions.

The Concert Choir will perform Monday, April 22; a concert of chamber of music is scheduled at Fowler Center Tuesday, April 23, at 7:30 p.m.; a student recital of chamber music will be Thursday, April 25, at 11 a.m. in the Recital Hall of the Fine Arts Center; and the Wind Ensemble will be joined by two local high school bands for a concert in Fowler Center Thursday evening. Admission to these concerts is free, as well.

According to Dr. Oliver, “At Arkansas State University we are delighted and thrilled that Dr. Maslanka has chosen to spend time with us and allow us to be enriched both musically and intellectually through the study and performance of his music. He has inspired all of us. We are grateful for his willingness to share his insights and rich spirit.”

Born in Massachusetts, Maslanka pursued a music education degree while studying composition at Oberlin Conservatory of Music. He studied abroad his junior year at the Mozarteum in Salzburg, Austria, then attended Michigan State University in a combined master’s and doctoral program. Dr. Maslanka’s career in academe began in 1970 when he started teaching at Geneseo College in New York. Following stops at Sarah Lawrence College and New York University, his final full-time academic appointment began in 1981 at Kingsborough College, City University of New York.

In 1990, Dr. Maslanka left academe and began his career as a free-lance composer. That same year, he and his family moved from New York City to Missoula, Mont., where they still live today. He has been a guest composer at more than 100 universities, music festivals, and conferences. His music has been the subject of numerous research articles, dissertations and book chapters. He has received numerous awards and recognitions for his compositions which have been performed extensively throughout the United States and throughout the world.

According to Oliver, Dr. Maslanka’s style could be characterized by a contemporary blend of heart-felt lyricism and rhythmic drive, coupled with memorable sonorities. His music is notable for its poetry, warmth and spiritual qualities. Inspiration is frequently drawn from such fascinating sources as the dreams of a young girl as recorded by the great Swiss psychologist C.G. Jung, the work of African writer Ahmadou Kourouma, and the poetry of Richard Beale.

The concert at Arkansas State will begin with Maslanka’s work “Unending Stream of Life” Variations on “All Creatures of Our God and King” conducted by Cheri Avery. This piece is a set of seven “songs” for wind ensemble, each embodying the original hymn tune, or relating to it in some way. According to Dr. Maslanka, “All things of light are paralleled and powered by an element of darkness, and my variations, particularly two through five, probe in that direction. Darkness here means awareness of a deep mystery in the universe, and of struggles that all endure in this life.”

The next piece on the program is “Liberation.” This piece, composed in 2010, is like many of his works: very powerful and introspective. It was written for a consortium of ensembles in Japan and uses the Libera Me Gregorian Chant. According to the composer, this music tells us that there is hope and light even amidst utter devastation. The music incorporates three sections of choral chant surrounded by instrumental sections using both large and small numbers of players.

The final work of the concert and of Dr. Maslanka’s residency is his mammoth piece “Symphony No. 8.” Cast in three distinct movements, the musical layout suggests a single large-scale panoramic vista. According to Dr. Maslanka, “Symphony No. 8” “ . . . is a response to a much deeper vital creative flow which is forcefully at work, and which will carry us through our age of crisis. This music is a celebration of life. It is about new life, continuity from the past to the future, great hope, great faith, joy, ecstatic vision, and fierce determination.”

Oliver added, “The end of the symphony is music of praise and gratitude for all that is, and it is directly related to the musical material that was contained within the first piece of this concert. It is a stunning conclusion to both the concert and Dr. Maslanka’s time here in Jonesboro.” 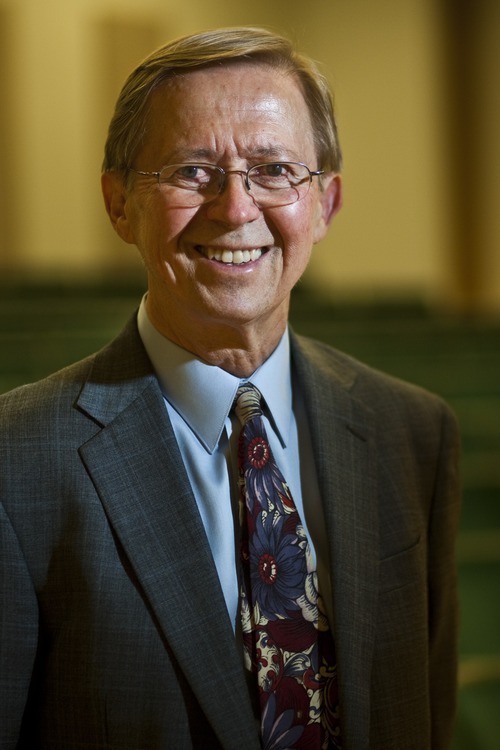 " . . . we are delighted and thrilled that Dr. Maslanka has chosen to spend time with us and allow us to be enriched both musically and intellectually through the study and performance of his music. He has inspired all of us." -- Tim Oliver