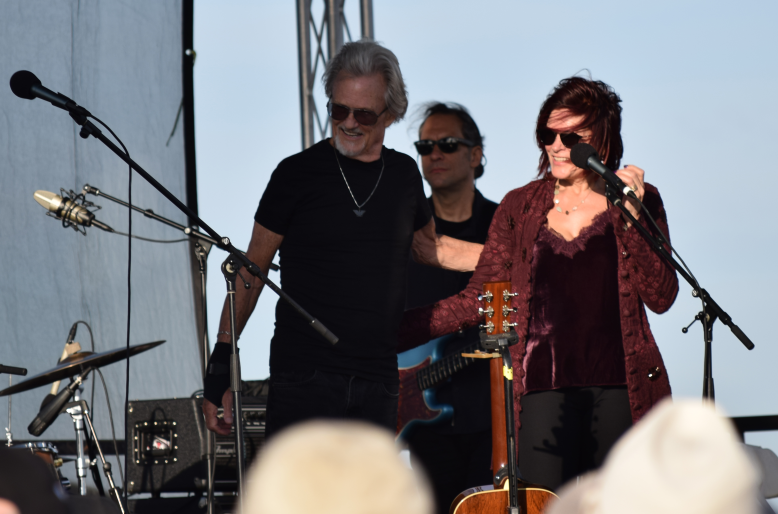 After immensely successful music events honoring Cash and benefitting restoration of his boyhood home, a new chapter began in 2017 with the Johnny Cash Heritage Festival. The new event combined educational activities in Dyess, as well as entertainment and special events, to continue the legacy of the earlier concert series held in Jonesboro.

“Welcome to the Johnny Cash Heritage Festival,” announced Rosanne to an enthusiastic crowd who gathered to enjoy the outdoor concert. “We are so thankful to Arkansas State University because of all the university has done since 2011 to make all of this happen today.”

Area country and music artist Buddy Jewell, who attended A-State, opened by singing several of his songs. He was followed by Joanne Cash and Tommy Cash who sang songs reminiscent of their early lives living in the New Deal Era home in Dyess.

Kristofferson sang a couple of his well-known songs and joined Rosanne on stage to finish out the concert. Rosanne sang songs she has written, including “The Sunken Lands” from her award-winning album “The River and the Thread.”

“You think about the idea of returning to your family’s homestead where your father slept as a little boy and it moves you,” she told the crowd.

All of the entertainers gathered on stage to sing, “Will the Circle Be Unbroken,” which has become a signature song to close out the Cash festivals.

Earlier in the day, Bill McDowell and Michael Streissguth made the final heritage presentation of the three days of speakers. A-State Chancellor Kelly Damphousse served as the moderator after introductions by Rosanne Cash.

McDowell, author of Ground: A Reprise of Photographs from the Farm Security Administration (FSA), made a presentation called “Resurrecting Images from the Great Depression,” while Streissguth, author of American Culture and the Art of Johnny Cash, discussed Cash’s early life and influences of a bygone place and time on his music.